So, just over a month and no-one has seen anything from me… are you lot still here? I hope so, or if you have left I hope you’re not too far down the road because I’m calling you all back in again. You don’t get off that easily! Seriously though, apologies. The last few weeks have been a mess of computer failure, work overload and family chaos. However, at least 2 of those have calmed down and work is slowly coming back under control (downside of being self employed – if someone has to work late, it’s always you!).

So you might be asking yourself, if he’s been too busy to post for 4 weeks then what has he got to post about? Well, this weekend was Hammerhead, my most local of local shows (a 5 minutes drive). I had hoped to go to Vapnartak in York but it’s a long drive and things were still chaos at my end so this was my first wargames outing this year. I’m still getting used to the idea of show reports so I didn’t take anywhere near as many photos as I should but hopefully you’ll enjoy it all the same.

10am, bright and early, the doors open and the queue rushes in. Entry was handled very quickly with 2 queues and a no messing about. £4 to get in and a wristband to ensure re-entry. The horde charged through the doors and I quickly dodged to the side and let them, I was in for the long haul!

Layout in the hall was good, lots of space between stall and games plus I didn’t hear any stallholders say they were unhappy with the space allocated (could have something to do with it being run by a stallholder Kallistra). The hall was much bigger than last year, which I felt was a little cramped, but there were also many more stalls with some I hadn’t seen there before. The mix of games and models on sale was good, a wide variety of scales and styles, it seems to have lost the stigma of being only Sci-Fi and Fantasy (as it was when part of Partizan) and is definitely an all-rounder now.

I won’t bore you with a blow-by-blow of every stall there but rather pick out the highlights, with the provision that this is heavily skewed by my interests!

Baccus 6mm – I’d be shot if I didn’t mention Peter, he’s part of the reason I’ve been so busy just lately (but don’t let that count against him!). It was good to see 6mm models on sale here as traditionally Newark has been a primarily 28mm region (being surrounded by Citadel, GW, Foundry… understandable!). Peter does a great job of converting the masses to “God’s Own Wargaming Scale” aided by Dr Mike’s Painting clinic. The Baccus stall is also a great place to pick up wargamers like Henry and Neil (50% success rate this time!).

Pendraken/MiniBits – My name is Stewart and I am an addict. My dealer is Leon at Minibits and my particular brand of high is freshly laser cut MDF. Can anyone out there say they don’t love the smell of laser cut MDF? Please agree with me, I can’t be the only one! I also managed to lay my hands on their new set of rules, Warband, which I’ll be reviewing soon (will it topple Warmaster: Ancients as my preferred rules?)

Red Eagle Miniatures – Recent recipients of several ranges from Skytrex, including the Napoleonic Naval ships I’ve been playing with recently, I had to make a bee line for this stall. I snagged a whole host of photos of their Napoleonic ships are they are still trying to get pictures onto the website but agreed not to post them here are they were really place-holders. Spoke for a good long while about the investment they made and I’m really happy to deal with this company in the future, the range is in safe hands!

Otherworld Miniatures – Some of the most exquisite models I’ve seen, excellently painted and displayed. I had to show real restraint here but I just know that I’m going to relent soon. Their Wraith models would make a great new take on Ringwraiths for Lord of the Rings while the Shadows have a more classic look. Did I mention that I’m planning to put together a Mordor force? What was I saying about downscaling this year? What do you think I am, a wargamer?

Prodos Games – Somehow this company has gone unnoticed by me, I honestly can’t work out how… The stall was manned by possibly the friendliest human on the planet and the models are incredible. While I don’t think the game, Warzone: Resurrection, is my cup of tea (I’m just not a fan of games with cards, though I’m open to being convinced!) I’m really tempted to pickup just a few of the models to paint. They would make brilliant additions to a 40k style force and have the GW LotR style delicacy to them, rather than the overbearing and comical 40k standard.

There were some brilliant games being run and I just didn’t have the time or the energy to play them all. Here’s some highlights (again, skewed by interests)…

Mad Max Stop the Truck – A very well presented game that I’m sad I didn’t get time to join in with. An amazing board with great models on in quite a large scale (I’m guessing 1/32nd) and very effective LED lighting (above the table shining down). All of the guys running it were dressed for the part and everyone playing looked like they were having a great time. 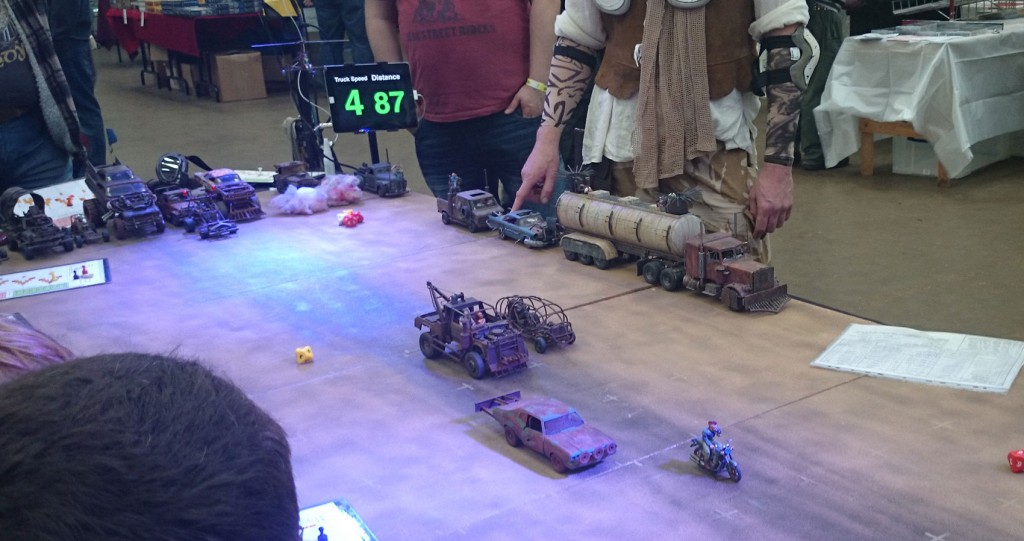 Sopwith – Sons of Simon DeMontfort’s WW1 aerial combat game, very addictive. Planning 3 moves ahead with limited ammo in an aerial free-for-all amongst the clouds was best described by the phrase “you know this is based on a board game for 8 year olds” as a host of grown men are scrutinising every move before revealing their plans. I’ve known the guys for a few years now and they never disappoint for simple, fun, inclusive gaming. Very kid friendly games too (my son joined in with Gruntz last year). Really hoping to get down to visit these guys this year for a few games too. 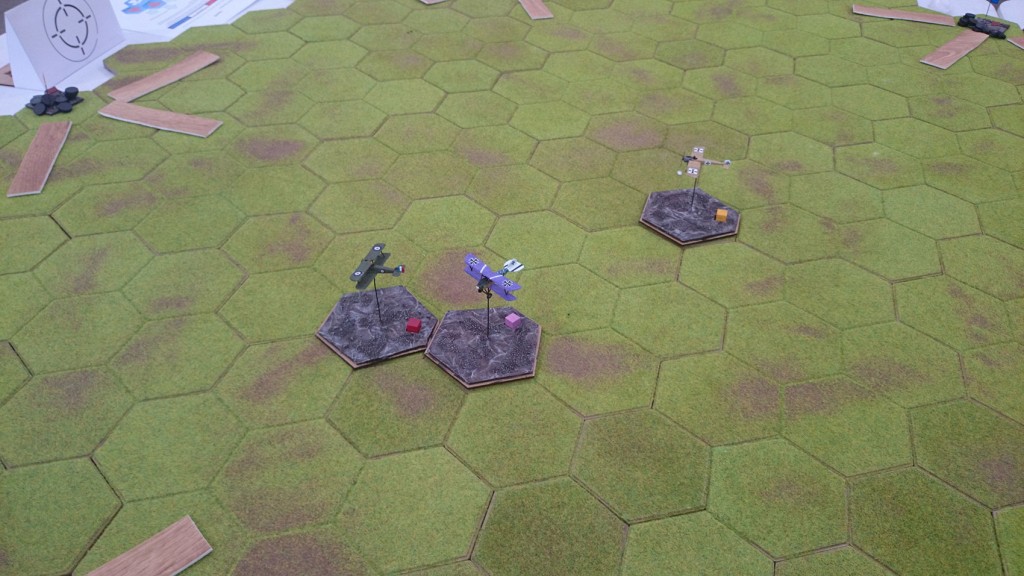 Trouble in IBIS – One of the more sensible games I’ve seen from the Doncaster group. Non-lethal combat between government forces (in various guises – army, police and more) and protesters. Armed with bottles, bricks, riot shields and tear gas the two sides clashed the battlefield. I kept trying to get back to this game but never did manage it… I look forwards to their next game!

Sorry to all of those that didn’t get a mention but I’m not going to rattle off the names of everyone. As I go to more shows I’ll try not to double up without good reason so eventually everyone should get a mention. But for now, onto the important question…

Did the wife let me spend any money???

Yes! Along with my day pass I got given my pocket money! She hasn’t told me what I have to do to earn it yet so it may end up costing me far more than I can afford but… I did make it stretch. Firstly I picked up some Kallistra hexes for MRO, something I’ve been promising to do for over a year now.

I then shuffled over to Pendraken/MiniBits for some bases. 1 pack of 80×30 bases will do for my larger Napoleonic Naval nicely (anything 3rd Rate or higher). The smell of MDF came free with this purchase… mmmmm

Then came my downfall and greatest victory. With little cash in my pocket I was aiming to look at everything before making any purchases but… Lord of the Rings cavalry models. 4 Riders of Rohan and 3 Knights of Dol Amroth, with a spare Warg – all for the sum of £4. As a bonus, one of the knights has a war horn (not sure I would give a knight this but it’s nice to have the option). Shortly followed by… 20 Aeronef along with some fighters (21 I think) and bombers (3) for £20. Both hands were summarily bitten off and I scurried away with my purchases.

Note: On later inspection the value of the Aeronef came to ~£75. All were as new, unassembled, not a dot of paint, no guns/turrets/fins missing. 1 model had a snapped fin but the detached piece was in the bag, an easy repair. Quite a variety of nations though, but primarily Japanese.

I then went on my quest for Wargames Factory Orcs… I left disappointed though, not a boxed set in sight. This was a shame because I really like the look of these models but wanted to see them in the flesh before committing. However, one stall (I’m 90% certain it was Last Valley but could be wrong) had horses… Wargames Factory horses on individual sprues. 12 sprues for £5, much better than how I was pricing them up for delivery from the USA. The only downside being they are totally without saddles and tack, but that means they are fairly universal and my modelling skills may have to improve!

With my last show being, I think, Partizan in September last year it had been a long time since I’d seen some of these people so it was great to catch up and chat. Not just with stallholders but also gaming groups and celebs (yes Henry, I mean you…). I tend to reach that point towards the end of the show where there’s so much more I want to do but I’ve just reached my limit, I’m worn out and nattering is all I can do so apologies to those people who I tied up for far too long.

So, are you going to see more of me on this blog now? Yes
Didn’t you say that last time? Yes
Do you mean it this time? I meant it last time, life happens, but I have every intention of getting more and more posts up here now that things are in full swing again!
So what next? I… erm… well…. it’s a surprise!